WeBS counts today included 75 Greylag Geese, 72 Canada Geese, 46 Mallard, 10 Tufted Duck, 2 Pochard and a single Coot at Burton Riggs and the highlights at a predominantly frozen Seamer Road Mere included a Pochard and a Water Rail. The Harbour area was fairly quiet again but 4 Shags were off the entrance and a few Mediterranean Gulls were around the Holbeck Car Park.


At Thornton-le-Dale there were 12 Hawfinches around the churchyard and Church Lane area but no news today from Brompton-by-Sawdon. On Cayton Carr we had 22 very mobile White-fronted Geese; a Short-eared Owl was around the mound north of Seamer Tip pool; a Kingfisher and a Dipper were seen in Peasholm Glen; 2 Stonechats were at Cromer Point and the waders in Jackson’s Bay included 13 Ringed Plover, a Sanderling and 4 Dunlin.


Last but not least the Long Nab area produced a Pink-footed Goose that flew south with 75 Canada Geese and was then seen on Johnson’s Marsh, 14 Common Scoter (S), 57 Red-throated Divers (12 S, 45 N) and 2 argentatus Herring Gulls (S) also in the area were 32 Golden Plover and 120 Skylarks. 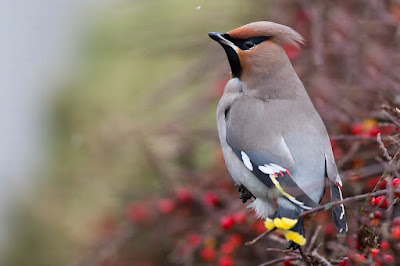 Posted by Scarborough Birders at 22:34