A Little Egret was at Johnson's Marsh this morning along with 10 Grey Herons. A Bar-tailed Godwit flew north along South Cliff and 35 Oystercatchers and 32 were in the roost there. A Common Sandpiper was on Black Rocks and a Kingfisher briefly in Cornelian Bay before flying south. Two Little Ringed Plovers with three chicks were at Wykeham East Lake along with one Dunlin, three Oystercatchers and a Great spotted Woodpecker. A minimum of four singing Quail were in the area of Hog Pastures Buildings north of Snainton along with six Yellow Wagtails, one Little Owl and one Barn Owl. A pair of Lesser Black backed Gulls was on rooftops near Ramshill Road traffic lights and a family group of 3/4 Spotted Flycatchers were at Wyedale Hall. Five Common Buzzards and  a Peregrine Falcon were seen from Wykeham Raptor Viewpoint and with single Garden Warbler, Marsh Tit and Nuthatch nearby. A steady stream of Common Swifts west was also noted. Two Tree Pipits, four Common Crossbills, two Garden Warblers, one Willow Tit, one Little Grebe and three Tufted Duck were reported from Wykeham Nursery. 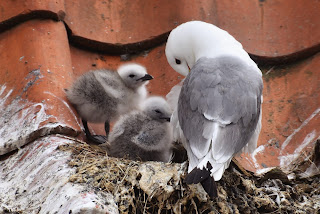 Kittiwake and chicks by Philip Damms.

Posted by Scarborough Birders at 21:08