A Wood Warbler and Long-eared Owl were reported from Bedale Beck above St. Helen's Caravan Park and a Little Ringed Plover was at Wykeham East Lake. The Whooper Swan remained at Seamer Road Mere and a Tufted Duck with six ducklings an a further 16 adult Tufted Ducks were at Seamer Tip Pool. A Little Egret was again at Johnson's Marsh and it or another was at Scalby Beck. Four Mandarin Duck and a pair of Oystercatchers with a chick were at Harwood Dale Lake. Three Nightjars, three Tawny Owls and a Woodcock were at Givendale Rigg/ Hawdale in Dalby Forest this evening and two Nightjars and a Woodcock were at Housedale. 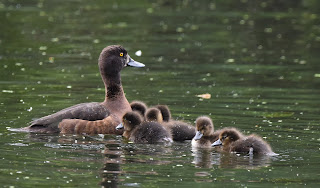 Female Tufted Duck with brood of six by Terry Crook.

Posted by Scarborough Birders at 20:37