The overwintering Whimbrel left its roost in Burniston Bay at 07.43 when it flew off to the northwest, further south on the coast in South Bay the Velvet Scoter remained until 13.00 when it flew south towards Cornelian Bay and there were also a Mute Swan, a Razorbill and 2 Common Scoter in the bay.


Despite minor access problems at the moment at Wykeham Raptor Viewpoint there were a Goshawk, 8 Common Buzzards and a Kestrel and in Langdale Forest 6 Goshawks including observation of display flight, a Common Buzzard, 2 Woodcock and between 1 and 5 Common Crossbills at every stop.


In the Seamer area a 2cy Iceland Gull was seen at the Seamer Carr Recycling Plant in and around the buildings with 600+ Herring Gulls, presumably this is the same bird seen on the 28th January to the south of Seamer Tip pool. Also around this area were a Woodcock and a Willow Tit on Seamer Tip; 2 Shoveler, 5 Gadwall and a Shelduck on Seamer Tip pool: 7 Pink-footed Geese at Grove Farm on Cayton Carr and at about 15.00 12 Pink-footed Geese went low to the east.


At Wykeham South Lake today we had 10 Great Crested Grebes, a Goldeneye and a pair of Oystercatchers and finally today a Little Egret was seen on Ellerburn Beck. 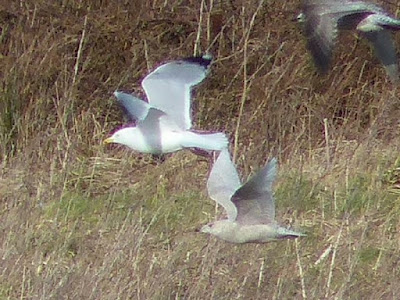 Posted by Scarborough Birders at 09:01